YOUR MAMAS NOTES: Summers a-comin’ chickens and children so, if you don’t already own a crazy expensive  shack at the beach, it’s time to start thinking about securing a sickeningly expensive rental for the beach going season. Thanks to a seaside canary we’ll call Ben Tothebeach, Your Mama has learned that one, relatively and comparatively modestly priced option for West Coasters may be the compact ocean front cottage in Malibu, CA that Tinseltown scion and part-time actress Natasha Gregson Wagner has made available for lease at $20,000 per month.*

Miz Gregson Wagner, in case y’all don’t know, is the daughter of British producer/writer/agent Richard Gregson and child star turned movie actress Natalie Wood, who tragically and mysteriously drown in 1981 off the coast of Santa Catalina Island. After momma Wood married actor Robert Wagner (Hart to Hart) for the second time in 1972 he adopted Natasha which is how she came to have the (second) surname Wagner.

Anyhoo, property records show Miz Gregson Wagner purchased the property way back in late 1996 for $1,200,000 when she was just a dewy young woman in her mid twenties. Imagine that. Those really were the real estate salad days, weren’t they, when you could snatch up a wee beach front home in Malibu for under a million and a quarter clams? Your Mama will let the real estate experts in Malibu determine what the value of this house would be if it were for sale but we’d bet both out long-bodied bitches, Linda and Beverly, that it’s at least several times more than the lady paid.

Pale blond wood floors run through out the open plan main living/dining space that has a pitched and beamed ceiling, a brick fireplace in the living room area and a wide bank of wood-framed glass sliders that open to a beach front deck that spans the full width of the house.

The matte finish wood floors extend into a cozy den as well as into the recently-remodeled and sky-lit eat-in kitchen outfitted with crisp, discreetly hardwared white cabinets, open upper cabinets for kitchenware displays, marble counter tops and back splashes and—natch—high grade stainless steel appliances. A wood-framed sliding door set into a wall painted an unusual shade of black connects the kitchen to land side courtyard dining deck and Zen garden.

Listing details suggest the walled and gated beach house has a somewhat unusual set up with a compact beach side main house with just one ocean view master bedroom and one bathroom slathered in olive green subway tiles. Separate detached guest quarters offer a spacious second master suite with vaulted wood ceiling and marble bathroom plus an additional small office, nursery or bedroom.

Last year Miz Gregson Wagner and her actor man-friend Barry Watson (Gossip Girl, 7th Heaven) made a girl baby out of wedlock—those moral flouting Hollywood types—which may or may not have something to do with her/their decision to lease out her charming but not exactly small child friendly Malibu getaway. As far as we know or can quickly tell from a spin through various property record data bases, Miz Gregson Wagner does not own any other residential real estate in Los Angeles.** Twice married Mister Watson also does not appear to own any residential real estate in Los Angeles** although he did previously own a couple of houses up in Topanga Canyon, one he sold 1995 and the other he got rid of in 2009.

If you’re among the financially fortunate who are willing and able to spend ten times as much dinero on a seaside summer rental there’s always the glassy, Malibu Road contemporary sold by Perry Ellis’s handbag designer daughter Tyler Alexandra in 2007 for $16,000,000 and currently for rent at $200,000 per month. For a mere quarter million clams a month sand and sea seeking Wealthy Wendies and Richie Riches can opt for the much-coveted, guard-gated Colony community where some of the other owners of homes include movers and shakers like Tom Hanks—who owns two houses, Brian Grazer, Jim Carrey, Jason Statham, Peri Gilpin and boob-toob producer Mark Burnett and wife Roma Downey. By Your Mama’s admittedly unscientific research, billionaire media mogul Jerry Perenchio owns—buckle your real estate safety belts, butter beans—no fewer than dozen homes behind the guarded gates of the Colony not to mention a controversial private golf course that abuts the swanky seaside enclave.

Three time Academy Award-nominated Tinseltown legend in the making Leo DiCaprio—always a bridesmaid, never a bride at the Oscars—owns (at least) two homes in da Bu including an ocean front compound in the western end of the guard gated Colony community that is up for sale for $23,000,000 and available for short term lease at $150,000 per month.

Barely working (h)actress and occasional tabloid train wreck Pam Anderson has her recently completed land-side contemporary inside the Colony is listed for sale at $7,750,000. (More on that shortly.)

Picture of her Home 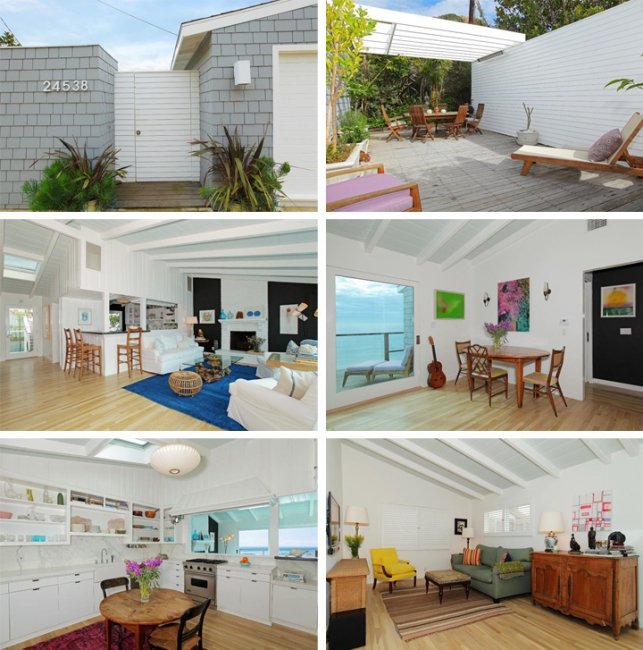 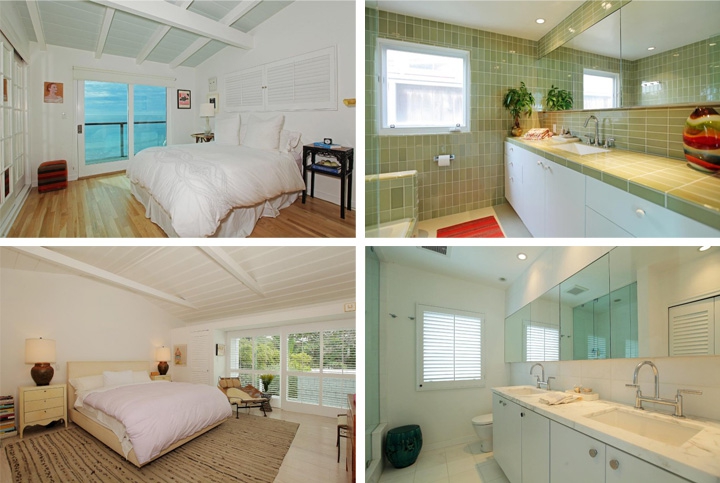 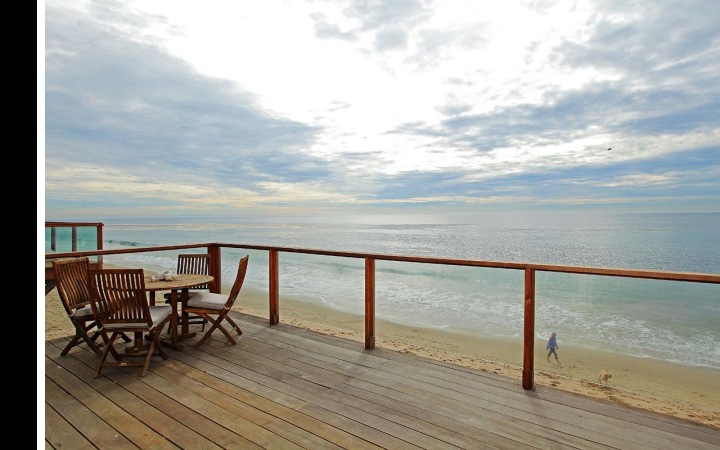